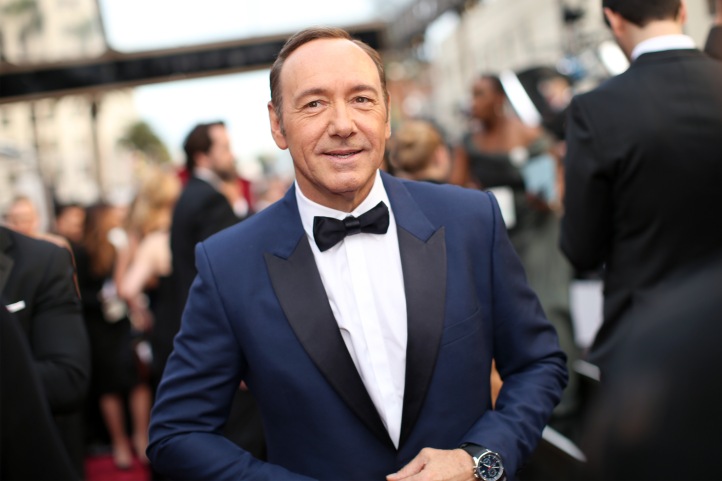 The Tony Awards announced today that Tony and Academy Award winning actor Kevin Spacey will host  the 71st Annual Tony® Awards live from Radio City Music Hall in New York City, Sunday, June 11 (8:00-11:00 PM, live ET/delayed PT) on the CBS Television Network. This will be Spacey’s first time hosting the Tonys. He won a Tony Award in 1991 for Best Featured Actor in a Play for his performance in “Lost in Yonkers.” The Tony Awards are presented by The Broadway League and the American Theatre Wing.

“I was their 2nd choice for Usual Suspects, 4th choice for America Beauty and 15th choice to host this year’s Tony Awards. I think my career is definitely going in the right direction,” said Spacey. “Maybe I can get shortlisted to host the Oscars if everyone else turns it down.”

“We are thrilled to have Kevin, who has mastered the Broadway stage, the big and small screens and the West End, host this year’s Tony Awards! His spirit and passion for live theatre makes him the perfect host, and we can’t wait to see the energy he brings to Radio City on Tony night!” said Charlotte St. Martin, President of The Broadway League, and Heather Hitchens, President of the American Theatre Wing.

“We’re excited to be working with a witty and charming host who is not only a Tony-winning actor and fan of live theatre, he’s also a president who is a true champion of the arts,” said Executive Producers Glenn Weiss and Ricky Kirshner.

“A true star of television, film and theater, who better than Kevin Spacey to host this year’s Tony Awards?” said Jack Sussman, Executive Vice President, Specials, Music and Live Events, CBS Entertainment. “With his extensive repertoire, charisma and unparalleled dedication to live theater, we are thrilled to have him join us for this prestigious television event.”

Award-winning producer and actor, Kevin Spacey, received a Tony Award in 1991 for Best Supporting Actor in Neil Simon’s “Lost in Yonkers.” Spacey has also starred in the Broadway and West End productions of “Long Day’s Journey into Night,” opposite his mentor Jack Lemmon; as well as the title role in the Sam Mendes production of “Richard III,” which toured to 12 cities around the world as part of the three year Old Vic/BAM/Bridge Project. He was made a CBE (Commander of the British Empire) by Her Majesty the Queen for his services to theatre. He has also won the Evening Standard and Olivier Awards for Best Actor for his role in “The Iceman Cometh.”

Inspired by Jack Lemmon, Spacey has often launched initiatives to help young people get their start in the competitive worlds of film and theatre, including: The Kevin Spacey Foundation, which offers support to young actors, writers, directors and producers (including workshops during the tour of “Richard III”); And the short film competition “Jameson First Shot,” awarded writer/directors from South Africa, Russia and the US, Canada and other countries with the opportunity to direct a short film starring a major actor. Most recently Kevin was awarded an Honorary Knighthood from Her Majesty the Queen for his work at the Old Vic, education and philanthropy.

Spacey currently stars in and executive produces the Netflix original series “House of Cards.” Since the show premiered in 2013, he’s been nominated for multiple Emmys and has won both Golden Globe and SAG Award for his performance as Frank Underwood. He has won Academy Awards for his performances in “The Usual Suspects” and for “American Beauty”. He was most recently seen opposite Michael Shannon in “Elvis & Nixon”. He will next be seen in “Billionaire Boys Club”, Edgar Wright’s “Baby Driver,” and “Rebel In The Rye” for director Danny Strong. For over a decade, Spacey served as the Artistic Director of The Old Vic Theatre Company in London.Spacey recently stepped down from this role, but during his time appeared on stage at the Old Vic in productions of “National Anthems,” “The Philadelphia Story,” “Speed the Plow” with Jeff Goldblum, “Inherit the Wind,” “A Moon for the Misbegotten,” and the acclaimed production of the one-man show, “Darrow” – an examination of the legendary Chicago lawyer Clarence Darrow.

Ricky Kirshner and Glenn Weiss of White Cherry Entertainment will return as executive producers of the Tony Awards. Weiss will also serve as director for the 18th consecutive year.

The official eligibility cut-off date will be Thursday, April 27, 2017, for all Broadway productions opening in the 2016-2017 season. Productions which meet all other eligibility requirements and open on or before the eligibility date are considered eligible for 2017 Tony Award nominations.

The Nominations for the 2017 Tony Awards will be announced live on Tuesday, May 2, 2017, from the New York City Public Library for the Performing Arts at Lincoln Center.